Wencon Release Agent makes sure that the compound or coating does not adhere, where it is not suppose to. For example for the repair of a bearing seat to prevent adhesion of the new bearing or with rudder cone repairs.

Repair of splitcase pump. Wencon Rapid to rebuild the damaged pump house. Wencon Release Agent on impeller to avoid adhesion of the Wencon Rapid on the impeller. 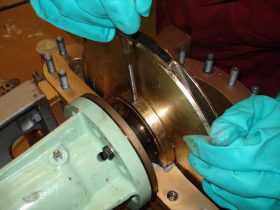